Look what cha’boy dug up!  Some RUDDY BP EXTRAS!!!  So this should hold us over until May 8th!!!

The released scenes shine a whole new light on the movie, with one revealing that Okoye (Danai Gurira) and W’Kabi (Daniel Kaluuya) were married!

Not only were they married, but they were actually discussing Okoye stepping down from her role in the Dora Milaje to have children.

In another, we see T’Challa (Chadwick Boseman) reminiscing about his father, saying things like the man could “run as fast as a zebra.”

Watch the scenes below:

Hmmmm… I seem to remember a certain patriarch who said something similar about his athletic capabilities?  Hmmm, what was his name… OH YEAH!  JUDAH!!! 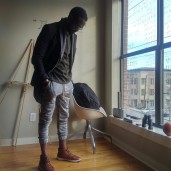 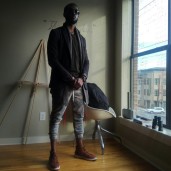 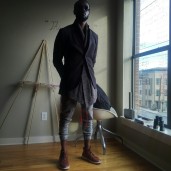 With this weekend’s opening of Marvel’s Black Panther I am excited 😃 for my people’s jubilation for the awe inspiring, positive, visual representation of so called “black people” in a world that constantly feeds us a negative one.  But at the same time we must be vigilant.  Brothers and sisters… one’s STYLE should be a representation of one’s HERITAGE, TRADITIONS, & CULTURE and not merely an illustration of one’s fantasies.

“A man may be known by his look, and one that hath understanding by his countenance, when thou meetest him. A man’s attire, and excessive laughter, and gait, shew what he is.” Ecclesiasticus 19:29-30 KJV 1611

And just to show that I’m truly sorry for being so late, here’s some more Civil War edification, Black Nerd Comedy!  Okay, you got me, really I should have used this brotha’ instead of last post.  LoL  Try not to laugh 😉

Sorry for the late post, but I’m just now picking my jaw up off the floor!!!  My favorite Marvel character is finally on the big screen with the rest of the guys!  So, as an apology for being so late, I decided to post a video breaking down the trailer for those of you who aren’t quite as comic savvy and for those who possibly haven’t seen it broken down, so actually, technically, I could be right on time!?  LoL  Enjoy!

Now, let’s turn our attention towards Marvel.  One word…BLACKPANTHER…okay that’s 2, but “one”sounds more bad ***.  LoL  When I saw him dogging the Cap’ in a foot race, I lost it!  LoL  True comic fans know how important minor details are.  Which reminds me, the eye shadow coming off of batman in the Batman vs Superman trailer is no biggie to me!  I think it nicely pays homage to the magic of comics!  Once again, it’s for the kids.  And I, my friends, am definitely childish when it comes to my comics.  LoL  One “Debbie Downer” is that Rodey could possibly be a victim of the “One Dead Negro Quota,” but we’ll see.  I mean it’s like, we can’t have to Negroes running around being awesome at once!  LoL Anyway, I’m interested to see how it all goes down, but my vote at the moment is for BvsS.  But honestly, I can’t lose!  Everybody wins when it comes to the present glory of comic related movies!  Observe…

I don’t know about you, but I just want to see BLACK PANTHER!!!  SHEESH!